Mistress Robin loves to wrestle guys she considers weak. She loves to make them her bitches by beating them. She challenged this guy to a fight knowing she could easily beat him. He was well built but he did not have her technique. She head-locked him and she leg-scissored him. She strangled him painfully and cruelly and he tapped out as he could no longer bear the pain he was feeling. 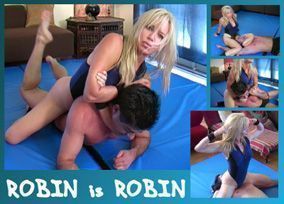